Senior Handicapper Matt Rivers of OffshoreInsiders.com has a free pick winner for Saturday is on Dayton.

Reasoning: Can you say letdown? Wow is this a great spot for Fran Dunphy's Owls to come out thinking their you know what doesn't stink and quite possibly lose in the end to a pretty good Dayton squad.

I'm not all in on the Flyers as they still aren't the most talented of teams but give Brian Gregory's former team some credit as they have improved since Gregory jumped ship to Georgia Tech. Kevin Dillard and the Flyers are now a solid 11-4 after the small home upset of a quality St. Louis squad and on the season have knocked off Alabama, Minnesota and Ole Miss among others. On Wednesday these guys went to overtime in the win against the Billikens and are absolutely feeling very good about themselves right about now. Josh Benson is done for the season but his squad has now won three straight and six of the last seven. 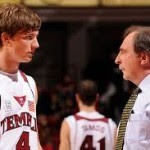 I backed Temple in that outright victory over Duke as that was a really good spot for the home Owls. Today though is pretty much the exact antithesis of that. Temple does has quality guard play for sure with Juan Fernandez and Ramone Moore but they are lacking in the big man category, which wasn't the end all all the Blue Devils, but are in a perfect spot to lay a semi egg today. A victory like the one against Duke would, more times than not, mean for a poor next game performance. These kids are basically 19, 20 and 21 year olds and asking them to stay at a high level after everybody congratulating them is not highly probable.

Dayton has only played a pair of true road games and lost them both so this spot can be a little scary as the road is never easy but Temple hasn't had Michael Eric since the fourth game and with their lack of bigs in this letdown spot I'll back the visitors and grab the half dozen plus.

For more information: Kansas State certainly shot themselves in the foot equaling a loss. It wasn't pretty but it happened. Back on track today with four winners led by a pair of 300,000* on the NFL gridiron with the Bengals and Texans and Lions and Saints. A pair of college hoops winners as well in a 200,000* involving Georgia State and George Mason along with a 100,000* Ohio State and Iowa. Do not doubt me, do not! Click now to purchase

Posted by Critical Sports Betting Info at 6:40 AM